The light is distracted by these substances and is partly absorbed and scattered. This scattered light is measured for turbidity levels. The measurement is made at a 90° angle with infrared or white light. Formazine solutions are used for calibration. 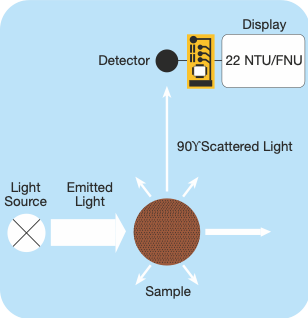 In physical terms, turbidity is due to particles of varying sizes scattering or absorbing light, giving the water in question a cloudy appearance. This turbidity is caused by suspended particles such as sludge, limestone, yeast or microorganisms.

The phenomenon of turbidity is measured using optoelectronic meters. An artificial light source emits a known intensity of light through a sample. The suspended particles scatter or absorb the light. The scattered light is then recorded on a photodetector.Scattered light is generally measured at an angle of 90°. This measurement principle is known as nephelometry.The results are expressed in terms of FNU (Formazin Nephelometric Units) - identical with NTU (Nephelometric Turbidity Units) - and TE/F (Turbidity Units Formazin).